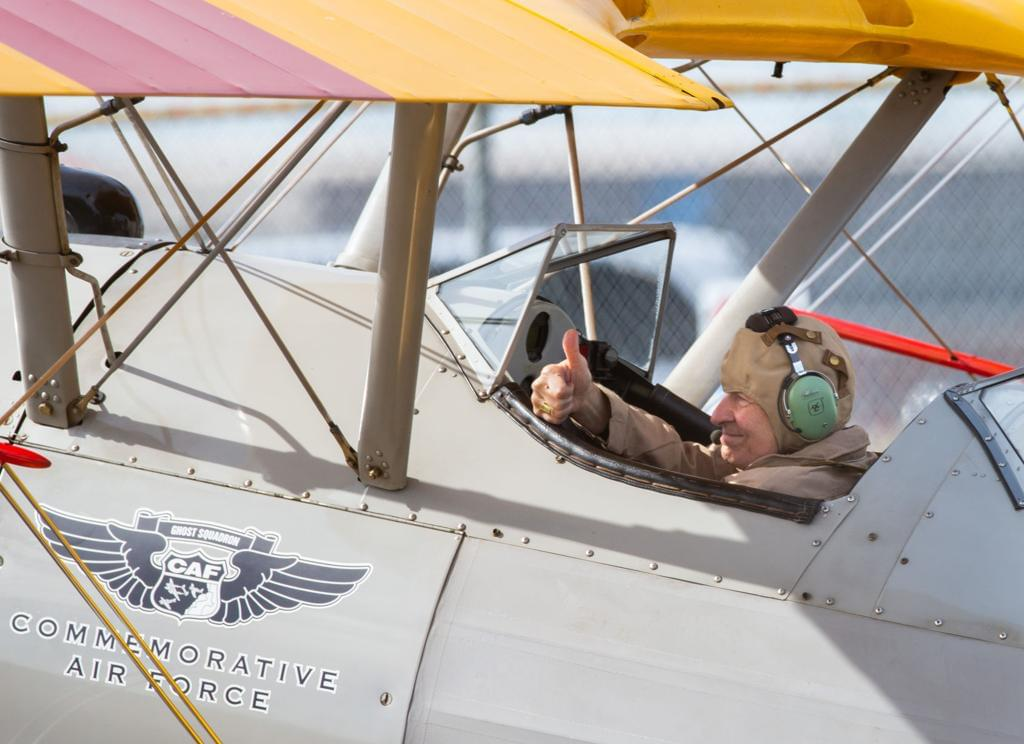 Seventy-year-old New Orleans Archbishop Gregory Aymond climbed into the open-air cockpit of a World War II-era biplane on Good Friday morning and roared off on a 25-minute mission.

As a pilot steered a course from the Lakefront Airport to Kenner to Gretna, to the French Quarter and back, Aymond blessed the population, which has been afflicted and isolated by the coronavirus, from a safe distance — 1,000 feet up.

“When I first did it, the water came back on me,” Aymond said, “but then I got situated.”

Aymond said he was a touch apprehensive when first asked to fly in the 77-year-old airplane that was used to train WWII fighter pilots.

“I asked some questions about the plane,” he said. How many pilots would be aboard? One. How many engines were there? One. Was the engine new? Newly reconditioned.

The flight was a sort of metaphor, the archbishop said: The plane was used in war and right now we’re in a war with the coronavirus. He said he particularly asked God to offer grace to the health care workers, the first responders and the city leaders who are on the front lines of the battle.

Aymond recently recovered from his own fight with COVID-19. The archbishop said he experienced only a high fever and was spared the coughing and severe lung congestion that others have suffered when infected by the virus.

New Orleans East resident George Baxter was having his wife’s car buffed when he heard the archbishop planned to pass over the city on one of the Catholic Church’s holiest days. So he drove the shiny Dodge Charger to the Gentilly lakefront, where he’d have a good view of the takeoff and landing.

“I said, ‘It’s the first time ever to see something like this happen; if I get to see, it’s amazing,’ ” said Baxter.

The colorful Stearman trainer that bore the archbishop left the runway at 9:58 a.m. and swiftly disappeared into the cool, cloud-striped western sky.

David and Janet Sanderson had driven all the way to the Gentilly lakefront from their home in north Kenner but had arrived just seconds too late to witness the start of the sacred circumnavigation of the city. The faithful couple were rewarded for waiting, though, when the returning plane’s canary-yellow wings reappeared overhead at low altitude.

“Any blessing at this time is welcome,” Janet Sanderson said.

On March 16, the Archdiocese of New Orleans canceled all Masses indefinitely because of social distancing protocols. For many people, Easter Sunday will be the first spent without family. The same is true for Jewish celebrants of Passover, which began April 8.

Janet Sanderson said Aymond’s gesture was especially meaningful if you considered that the septuagenarian had recently been ill.

“I think he’s jeopardizing his life,” she said admiringly. “At his age, his health, and just getting up in a small plane is risky.”

Aymond wasn’t alone in taking to the skies on Friday morning. Rabbi Lexi Erdheim, 29, of the Congregation Gates of Prayer Synagogue in Metairie, also ventured into the sky aboard the 1943 vintage aircraft to offer a blessing during Passover.

Rabbi Lexi Erdheim, 29, of the Congregation Gates of Prayer Synagogue

Erdheim, who took off at noon, said the traditional blessing asks God for healing and wholeness. Customarily, she said, a rabbi would read the names of those in the community who were ill, but under the circumstances of the coronavirus crisis, she planned to make it a blanket prayer for the whole city.

Earlier in the day, Lake Terrace residents Suzie and Chuck Surbeck sat on a bench near Lake Pontchartrain waiting for the flights.

New Orleans businessman and antique airplane enthusiast David Capo is the man behind the unusual union of sacred rites and barnstorming.

Capo said he heard that a few weeks ago one of the Commemorative Air Force pilots had taken a minister aloft to bless a small Mississippi town as it faced the coronavirus. Thus inspired, Capo set out to do something similar for the people of New Orleans, who were housebound because of the contagion during the Easter and Passover season.

“I said, ‘Wait a minute; people could just come out of their houses and get a blessing from the air,’ ” Capo said.

He dubbed the flyovers “spirit flights.”

Capo said he proposed the project to Aymond via a Commemorative Air Force pilot who also happens to be a private pilot for the Saints football team. Capo said he realizes the whole thing might sound a little wacky, “like a Monty Python skit,” but the elderly archbishop and the young rabbi agreed to the plan.

After her “spirit flight,” Erdheim said it was a little chilly flying around like Snoopy, but she loved it.

“It was really powerful, seeing everything at once” she said, “especially after being inside the same four walls for so long.”

She said she was inspired by the realization of “how diverse and thriving the city continues to be, even in a time of challenge.”